So, welcome to summer. I had a noob lined up. He ghosted. I had a backup lined up. He flaked Thursday night. And that’s when I decided to give you all the full Ridge treatment.

Today, in 2022, I have lots of thoughts regarding Ridge, but, inherently, despite Ridge’s impetus to be a Sean Cody model back in the day, Ridge still suffered fools gladly when he drove in from Sierra Vista to shoot content for ClubAmateurUSA.

And today, Ridge has switched branches in terms of his service to our country, and he still does not reside on the continental US, otherwise, I’d more than welcome him back to the CAUSA table. I never realized until this week that ours was a whirlwind romance in 2006.

I was a little surprised when Ridge first contacted me on my favorite sex & swingers site. Of course, I’ve had a recruiting profile on it since July 2003 and had viewed his profile several times over the last year.

So, I jumped at the chance to capture Ridge on video when he visited the Phoenix area last weekend. I was more than pleasantly surprised by his beautiful face (as some of you are aware, I’m an eyes & smile guy), his stellar build (check out those legs & that bubble butt!), and of course, his big ol’ cock. WOOF!

As I said to Ridge in a post-shoot email, his current online images do not do any part of him justice.

Oh, and another first during this shoot… Since Ridge and his girlfriend were on holiday and on their way out of town after this shoot, the g/f sat in my office during the shoot. Talk about an open & accepting relationship… 😛

Enjoy Ridge’s CAUSA debut! I’m sure you’ll be as ready as I am for his return to Phoenix and many more shoots.

Short & to the point… This is the weekend of the area men’s chorus’ concerts — in which I sing, and Jaxon is in town playing our “George of the Jungle” (yeah, picture Jaxon in a loin cloth)

Ridge came into town last week to shoot a couple of videos. This is one of my hotter “Round Two” videos given that he had two orgasms. DAYUM! The boy is HOT and HUNG!

Hopefully, you’ll enjoy nearly as much as Ridge did. 😛

Well, it’s been over a year in the making, and it finally happened…

Toward the middle of April I received an email from Shayne stating that he’d participated in his first MMF sexual encounter and was ready to do a shoot with another guy. I immediately sent an instant message to Ridge to find out if he was ready to take that step, and if so, when would he next be back in Phoenix.

We got it scheduled for the beginning of May, and another surprise, it came off as planned. WOO HOO!

Shayne was as nervous as the proverbial whore in church, and Ridge turned out to be quite the trooper. On this particular day, I got four ejaculations out of Ridge — two for his “Round Two” shoot and another two in this one! DAYUM!

These guys look stellar together on video, and this turned out to be a rather hot video. Between the two of ’em, we had 16″ of fun. 😛

For today’s CAUSA Classic, I combined two of Ridge’s shoots that originally propped in July and September 2006 since both videos in terms of toy play and prostate stimulation fit well together. Last month, seven and a half years later, I located Ridge on Facebook to find that he married in the Spring of 2013 and living on an island. Of course, he’s still gorgeous.

| Here are the two original video storyboards. Firstly, July 2006: Ridge has been scheduling more frequent trips to the Valley of the Sun. I’m thinkin’ that he’s enjoying his sexploration on video. This time around, we planned for him to take the “swizzlestick” (a term that Ridge coined) up his bum. Well, I used the swizzlestick on him for about 30 seconds and then unbeknownst to Ridge, switched it out with the flying, purple asshole vibrator. lol… This was the first time that Ridge had engaged in such extensive arse play. And given Ridge’s rigid cock and guttural moans, I’m also thinkin’ those were indicative that he thoroughly enjoyed himself. Oh, yeah… And the fact that Ridge told me that I needed to train his girlfriend how to do it, and lastly, but not least, the fact that he had an anal orgasm for the first time in his life! It was pretty wild to see, There was some major prostate massaging going on. Ridge felt the onset of his orgasm, and BAM! There it was… body spasms, labored breathing, cock and anal contractions… but no ejaculate. For all intents and purposes, Ridge orgasmed without ejaculating. Way cool! Of course, you know me. It ain’t over till the one-eyed monster is spitting at me, so I tortured Ridge some more until he gave me a second orgasm, and this time with ejaculate. Ridge was definitely spent and happy by the end of this shoot, and I was happy to capture another CAUSA first on video. | And from September 2006: As most of you know, I have a rather strong affinity for younger, built, beautiful guys with big blue eyes and big ol’ cocks. Thus, my infatuation with Ridge. WOOF! 😛 Alas, Ridge came (figuratively and literally) and went in just a matter of months. It was a whirlwind, one-sided romance. LOL But I do believe that we both enjoyed every minute of it… I can confidently say that because Ridge had a six-hour, roundtrip drive everytime he came into town for a shoot. Given that today’s video was his fifth shoot in a four-month period, I think he was enjoying the sexploration. 😀 Unfortunately, when we shot this video in mid-July, Ridge and I knew that it would be his last for quite some time since his job was taking him to the other coast of the US. {sigh} So, enjoy Ridge’s final (for now) CAUSA appearance. This video incorporates a little bit of everything… massage, oral, toys, etc. As you’ll soon see, Ridge was rairin’ to go on this particular day, and it didn’t take him long to “get there.” | Enjoy! CB | Casey Black | Messing. With. TexAZ. (c)

As most of you are aware, Ridge was stationed across the US on the East Coast back in July. So, when he called to tell me that he was going to be in Arizona for several days and was wondering if I wanted to shoot any videos, I, of course, jumped at the change. As most of you are also aware, I have a special affinity toward Ridge and his rather impressive cock!

In thinking about what I wanted to with Ridge this time around, I decided to build upon the “Blind Man’s Fluff” video line that I first shot with Billy for the CAUSA 100th video back in May 2005. Hard to believe…

With a little ice in hand, rubbed, tugged, and sucked Ridge’s third leg to it’s full potential and provided him (and you) another phenomenal orgasm!

CAUSA 190 – December 2006
Since Ridge was flying into town, I decided to shoot a couple of videos with him. You saw the first, “Blind Man’s Fluff,” last month, and now I’m presenting the second shoot of the day, “The Out-of-Towners,” with Marco & Ridge.

DAYUM! These boys are HOT together!

I’m totally infatuated with Ridge’s rather large cock, and I’m equally infatuated with Marco’s compact, built, furry body. So, bring the two together… Well, let’s just say that I had a rather… er… hard time editing this one! If ya wanna know more about the video, I guess you’re going to have to watch Marco & Ridge go at it.

I’ll be back with a new update on Friday, January 5, 2007. As always, thank you for your support of ClubAmateurUSA. 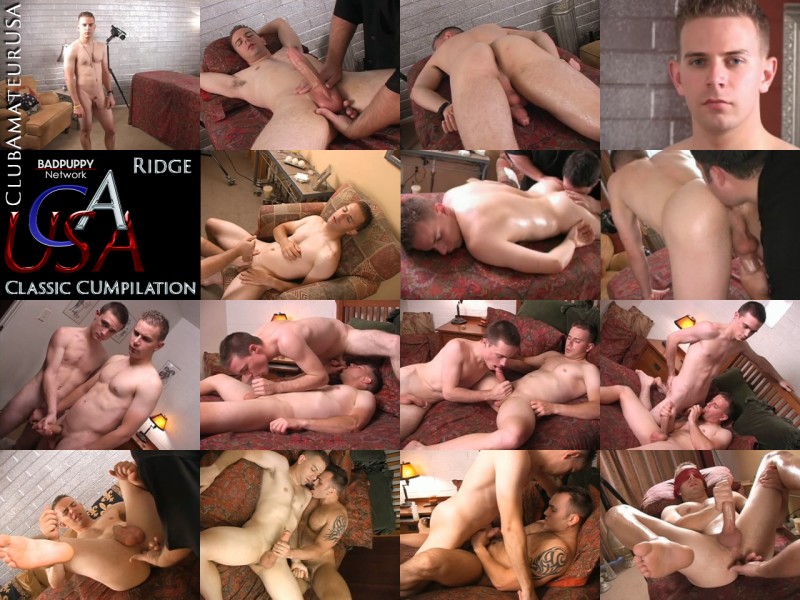 You can find out more about which cookies we are using or switch them off in settings.

Strictly Necessary Cookie should be enabled at all times so that we can save your preferences for cookie settings.

If you disable this cookie, we will not be able to save your preferences. This means that every time you visit this website you will need to enable or disable cookies again.

A strong relationship with our users is essential. A critical part of these relationships is establishing trust and confidence, which is why the privacy and security of your data has always been our priority for over 23 years. Over the last few months we have worked to get all of our web properties secured by HTTPS. We have secured not just the Contact, Login and Registration forms; but, your entire surfing experience is safe.

With the General Data Protection Regulation (GDPR) set to take effect on May 25, 2018 we are in the process of deploying updates allowing us to comply with new regulations and ensure people can continue using BEI (Badpuppy Enterprises, Inc.) properties with confidence. Although GDPR applies only to data collected from persons located in the European Union (EU), our goal is to continuously implement network-wide improvements and new functionalities for all BEI users.

If you notice an area of our site where you feel we can do a little better, please don't hesitate to contact us.

Cookies are small pieces of text sent by your web browser by a website you visit. A cookie file is stored in your web browser and allows the Site or a third-party to recognize you and make your next visit easier and the Site more useful to you. Cookies can be either "persistent" or "session" and are broken down into four (4) categories: Necessary, Preferences, Statistics and Marketing.

When you use and access the Site, we may place a number of cookies files in your browser. We use cookies to enable certain functions of the Site, to provide analytics and to store your preferences.

In addition to our own cookies, we may also use various third-party cookies to report usage statistics of the Service and enhance the over-all user experience.

Please note that if you delete cookies or refuse to accept them, you might not be able to use all of the features we offer, you may not be able to store your preferences, and some of our pages might not display properly.

Learn more about cookies, including how to delete them, by visiting AllAboutCookies located at http://www.allaboutcookies.org.